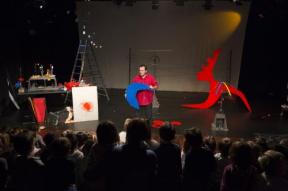 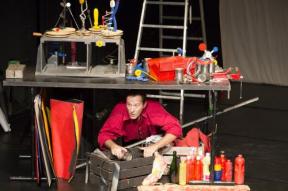 “When I was a kid I had many toys, but I was never satisfied.
Every day I added iron or copper wire or other materials…
Afterwards I built more complex ones, full of mechanisms…”

Alexander Calder’s words and his ingenious sculptures help us understand the reasons that lead an artist to create.
Let us imagine the atelier of a weird sculptor; he seems to be a blacksmith rather than an artist, because he uses the hammer and not the paintbrush. Let us listen to his stories and have fun with him and his games; let him take us to the weird world he is going to build all around us.
This show is based on the works by Calder, hunter of iron birds, clockmaker tuned by the wind, sculptor of time, stable and mobile tightrope walker...a playful engineer who stopped to watch movement.