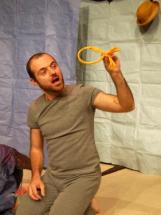 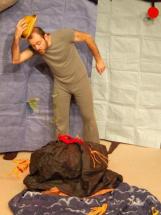 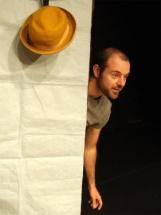 Mr. G. comes from an unknown place, he’s very surprised to find himself in a new environment and he is literally open-mouthed.

As soon as he starts exploring this strange place, the proagonist fnds a big paper-ball that seems to be there waiting to be unwrapped.

Astonished, he opens it and starts playing with what loos like a perfect world.

He discovers skies, seas, rain, animals... and from the initial astonishment, an interaction of sounds from the audience, the protagonist and the world of paper develops.

The first concept of the show was an intercultural project, a piece of artistic research to tell the story of mankind through a universal language, or a “non-language”, able to join the imagination of every children of every culture. A tale with no words in which the actor communicates only with sounds and movements.

The co-protagonist is paper: a simple and effective material that becomes narrative means, interacts with the actor and is shaped to create a “brand new world”.