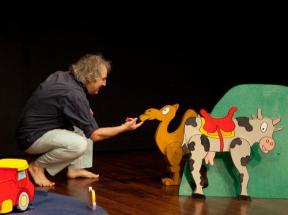 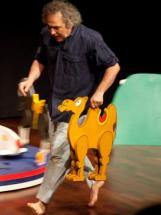 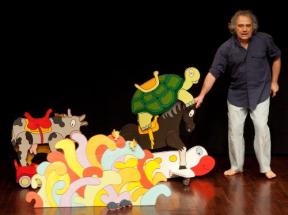 There’s a little merry-go-round, spinning round and round.It is covered with a red and white umbrella. Everybody likesspinning round and round. Then, one day, the umbrella breaks,the sun is too hot and the rain falls down. So, maybe becausethey need to, or maybe because they want to, the animals andthe other inhabitants of the merry-go-round, lorries, trains and planes, set outaround the world. On their journey far and wide, they will meet other animalsand means of transport. Then, one day, they find another umbrella. It is red andwhite, too. And they decide to go back and take it to the little merry-go-round.No regrets. Because it is good to go far and wide, but it is also good to go backand spin round and round.​
Little merry-go-round is a tale on friendship, on finding comfort in different dimensions, in the unkown world as well as in the familiar universe.