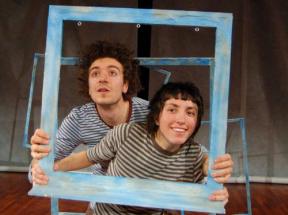 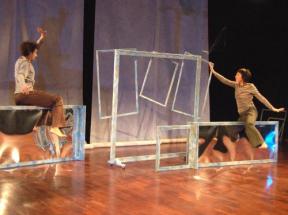 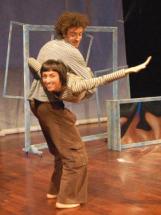 Looking at the sky photos

How does the world look like when it is seen through the eyes of a child who’s not even one metre tall?

What is his view of reality?

The two protagonists tell us the story of Flying Eye: he is sitting in the garden and looks at the world from below.

His curious eyes capture images and withhold them, like framed pictures.

His eyes fly amongst objects, houses, trees... to finally look up at the sky; it is always there.

Blue fragments become the frame and the background of the world, that that child who’s not even one metre tall is approaching.

“Looking at the sky…” is a performance on watching the world from a different point of view, paying attention to “a different look”.

Simple words come along with the actors’ action, looking for a unity of image made of lights sounds and movements.

The show can be performed in schools, but darkness is needed, as well as a free area of at least 6x8 metres.