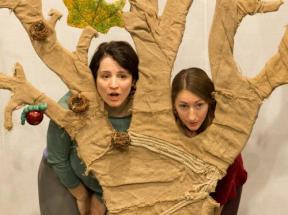 This is the story of a very particular tree, a tree without leaves.

It is not the story of a tree in autumn or winter. No, that tree had no leaves.

He had had so many, though. And then, one day, he had none.

Nobody stopped nearby, because it could give no shade or shelter.

It was because of this, or maybe because that was a very cold winter, that it decided it wanted to be well-covered; it decided to cover its branches with heat and colours.

So, when the wind brought it some nice underpants, it thought it would keep them there, on its highest branches.

Then the wind also brought hats, umbrellas, cloaks, signs, hammers, brushes and even a couple of pigs... Funny leaves, aren’t they? But they can offer shelter from the sun and the rain...

“The tree that steals underpants” is a funny story to tell the children how important it is to know our limits and to learn how to use them, without complaining and trying to “find ourselves” a little bit more every day.

The play is part of a series of productions considering word as the basic means of communication.