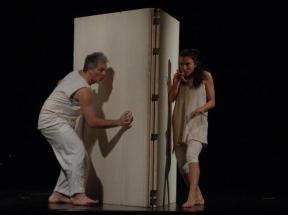 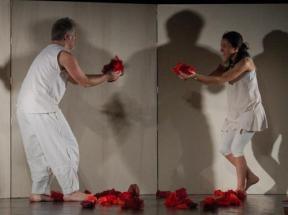 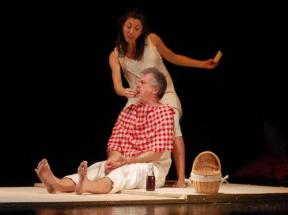 A he-wolf and a girl or a she-wolf and a boy?
It does not matter, what is important is to experience the tale we all know and that continues to amaze us. It is a story full of mysterious places, where fear and courage run together.
On stage, the two actors tell us the popular tale of Little Red Riding Hood, taking turns to interpret all the roles, both aspiring to interpret the wolf. The protagonists will become a he-wolf and a she-wolf, a little girl and a little boy, constantly entering into and coming out of the characters, just like children do when they play “What-if game”.
The props and stage design are simple but effective, with big wooden panels opening and closing as if they were the pages of an illustrated book. Together with few, essential elements (a red pillow, a basket and some bushes), they take the audience to the places of the story.
By running away and chasing each other, the characters retrace Little Red Riding Hood’s path in the woods, to finally enter the wolf’s belly.
And when they come out, they will be willing to tell the story again, just like children do when they ask their mother to read it again once it is finished.

>> Watch the trailer of the show


<<The two-hander brilliantly captures the energy of childhood play, as the siblings’ are interruptes by pillow-fights, plenty of chasing, and squabbles over who gets to play the wolf. Actually, the show seems to say, young people often engage in the type of experimental storytelling that many adult theatremakers covet: watching the siblings’ gender-defying, convention-flouting rendition reminded me of living-room performances that my family would put on. >>

Flossie Waite on Children's Theatre Review. "Little Red Riding Hood" has been selected as one of the Top 10 Shows of 2017.