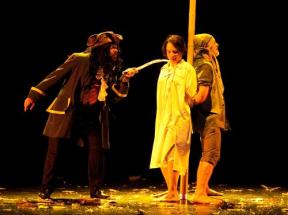 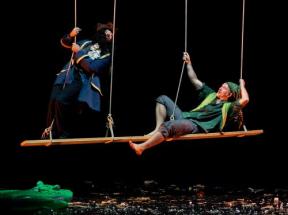 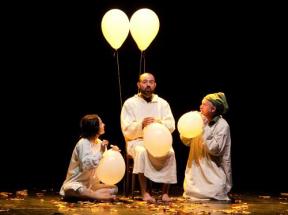 “When the first child laughed for the very first time, the laugh shattered into a thousand pieces and they all went skipping about.. And that was the beginning of faeries” (J. M. Barrie).
The show begins with a very contagious laugh, that make three grown-ups start playing and turn into a pirate or a crocodile, a fairy or Peter Pan.
The story of Neverland and the Lost Boys becomes the perfect occasion to explore big topics, such as dreams, the desire to fly, growing up and the changes that “becoming an adult” involves.
In a theatrical game between fiction and reality, the three protagonists will set out on a journey through the world of imagination, as James Matthew Barrie did in Kensington Gardens with 5 little brothers, inventing Peter Pan’s story for them.

Just like “Snow White”, Peter Pan is a show centred on storytelling and imagination.
The audience gets carried away while the actors play with theatrical conventions that involve both kids and adults.