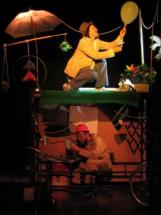 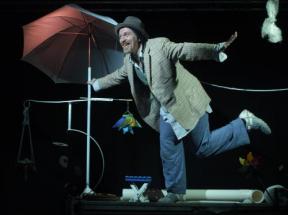 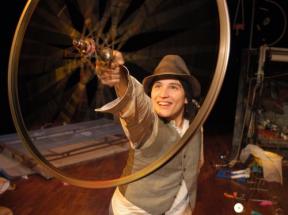 The two strange and curious characters Gustavo and Gioacchino live in a dump.Gustavo builds special machines and engines that have never been seen and his dream is to build an auger that can dig the way to China.
Gioacchino dreams of flying without any engine, but simply with the help of the wind, and he tells Gustavo of how a caterpillar, when turning into butterfly, can actually fly.
Everything can fly! Rubbish bags, paper sheets, feathers, balls, bins, everything you can find in the street. Maybe they could fly, too...
And this is how Gustavo, involved by Gioacchino, discovers the power of the wind, while Gustavo teaches him the effectiveness of mechanics.
Together, with the only force of desire and immagination, they will build a flying machine. Will they be able to take off?
Somebody says that Gustavo and Gioacchino managed to fly high in the sky, but nobody can really tell... nobody saw them.

The play is dedicated to Gustav Mesmer, known as the Icarus of Lutertal. Mesmer tried to realize his dream of flying using a bicycle for power. On one occasion, he managed to rise up to 50 metres above the ground, but nobody sow him.