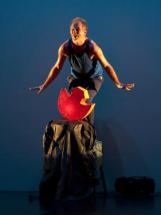 There is a gardener. His name is Noah. He has got a task to carry out: he has to cultivate a garden. However, maybe he is here for another reason...

There is a voice that reminds him. A serious and high-pitched voice. He has to tell a story; this is what the voice asks him to do. “Noah, you have to tell a story!”.

Because telling is like cultivating a garden: you have to choose the right plants to grow in a garden, you have to fill in the holes, to invent the parts you do not know (just like you add a stone or a new plant in a garden): it is a job, but it is also a game.

And the story, like the garden, is good not when everything is perfect, but when it gives joy to those who watch it, to those who listen to it (you can watch a tale and listen to a garden; oh yes, you can).