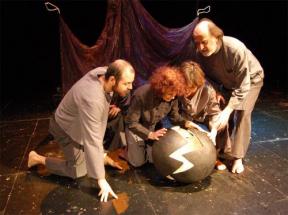 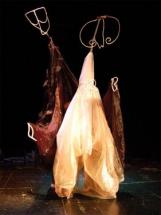 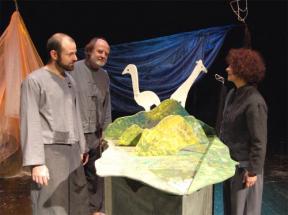 I give you the moon photos

I give you the moon

Once upon a time... there was no light, there was no sky, no earth and water. There was only Darkness.
Darkness was alone and bored, so it started to run to and fro. We don’t know how and why, but thanks to its movement, it generated Light and Darkness was no longer alone.
Light and Darkness played and played for an endless time, creating shades and transparencies. And from their games, Water came, and it divided itself into Low Water – the Sea, and High Water – the Sky.
Water was filled with Fish and Birds.
Then the Earth was created and with it the Grass, Flowers, Plants, Trees. And then Light created the Sun and the first day ever.
Finally, the animals came and men and women, and boys and girls, who gave a name to everything.

I give you the moon is a project shared by La Baracca and Marduix, a theatre company of Barcelona with which La Baracca has been collaborating for many years.