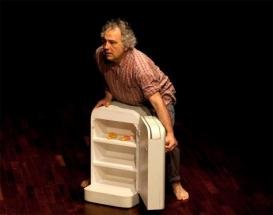 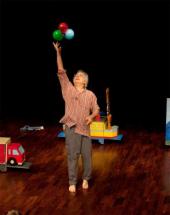 Adventures in the fridge photos

AVVENTURE IN FRIGORIFERO / ADVENTURES IN THE FRIDGE

The story begins in a very normal kitchen, a kitchen just like all other kitchens. A kitchen with a fridge, a table, a stove, some chairs…

Suddenly, a message: it is an SOS! The message comes with unpredictable messengers: the furniture of the kitchen suddenly comes to life and it becomes a “messenger”!

Somebody is calling, asking for help, and we cannot just pretend we do not hear, we have to leave and find out where does it come from. The furniture of the kitchen will then turn into means of transport to faraway lands.

The adventure begins, and just as in a treasure hunt, will be developed step by step. During the journey, we will meet a lot of animals, real and surreal, who will help us to reach who was asking for help…

In “Adventures in the fridge” the game of transformations and sudden appearances comes along with the elements characterizing a surreal adventure.

The play is part of the series of productions considering word as the basic means of communication: a “narration theatre” in which intense communication with children has already cleared the way to several projects of collaboration between artists and educators.