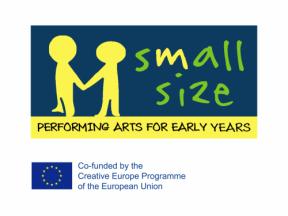 A European project involving 17 theaters and cultural centers in Europe devoting their artistic research to children, in order to share and develope their specific skills and know-how in the performing arts for early childhood. The network disseminate a culture for children, considering art as a means to build relationships and links between countries, citizens and generations.

Within the theatrical seasons of Teatro Testoni Ragazzin Bologna, various activities promoted by the project were realized:

> The Small size showcase section, which has counted more than a hundred performances for children aged 0 to 6 years only during the 2017-2018 season.

> Small size days (last weekend in January), three days dedicated to early childhood in the countries that join the Small size network with many activities for children from 1 to 6 years, to remember that “art is not a question of age, but of curiosity ".

> Visioni di futuro, visioni di teatro... the international festival of theater and culture for early childhood taking place each year at Teatro Testoni Ragazzi, Bologna.
The 2018 edition of the festival was the center of a series of activities, actions and research of the European project: dance for the very small, at the center of shows and meetings; the conclusion of the Indian Open Window path, the mentoring project launched in 2014, with the presentation of two productions; the Wide Eyes productions, the co-production project that characterizes Small size, Performing Arts for Early Years. The idea, born from the image of children's eyes, wide open to the world, led to the creation of 15 shows for early childhood.

"Small size, Performing Arts for Early Years", of which La Baracca - Testoni Ragazzi was project-leader, was the 2014-2018 project of the Small size network, supported by the "Creative Europe" Program of the European Union.

Find out the books and workbooks (in Italian and English) about our experience with early years audience.