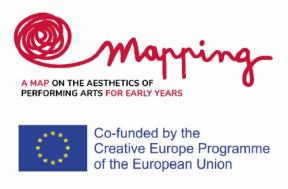 Mapping. A Map on the aesthetics of performing arts for early years

We are happy to announce that our latest project proposal has been selected by the European Commission, and will be supported in its implementation by the Creative Europe programme, starting from December 2018 until November 2022.


Mapping - a Map on the aesthetics of performing arts for early years is an artistic research project focused on creating a sensory-based relationship with very young children, from 0 to 6 years, through performing arts.
In particular, it explores the idea of “children-spectators”. Spectators of today, and not only of tomorrow.

Mapping is one of 17 Larger Scale Cooperation projects selected from over 90 proposals coming from all over Europe, and one of the 3 with an Italian project leader.


- THE MAP -
Mapping is a research work on the audience of early years considering different age groups, because an 18-month child will share his or her sensitivity with the artist in a very different way, compared to a 4-year-old kid.
An experimental map, a piece of fieldwork involving artists and academics aimed to identify recurrent and specific elements, keeping in mind the age and the different situations in which the young spectators watch the show.

The project want to build up a Map investigating four basic elements, significant of the entire relationship between young children and artists, through four filters, four fundamental dimensions of the performing arts.


- PARTNERSHIP -
The partnership is composed by theatres, institutions and artists who have established a deep relationship with early years over time, willing to offer their specific know-how in developing this piece of research.
The full partners are 18 and come from 17 countires: the partership covers a wide geographical area of the European Union, with no regional characterisation.

The 18 partners will be actively supported by two international networks, as well as by several universities and cultural institutions, to whom the researchers who follow the project belong to.
- WHY A PROJECT FOR THE VERY YOUNG? -

Children live in the peripheries of culture, and the youngest ones tend to remain stuck in the outmost periphery, because - according to popular sense - they don’t understand, they are “unable” and without any competence.
And yet, artists who work with children soon realize that they are a potentially extraordinary audience, and that focusing their artistic research work on them is definitely worth the effort.
Small children watch and listen to learn, to discover the world and perceive its innumerable details.

Starting from the next months we will keep you updated on the launch, the evolution and the many activities of Mapping.

Find out the books and workbooks (in Italian and English) about our experience with early years audience.