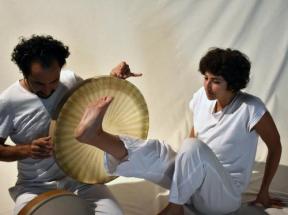 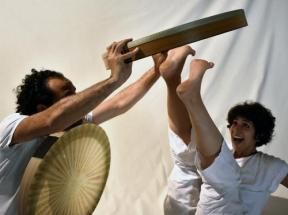 A journey to discover life, starting from the four elements that create life.

A game that two actors lead through their bodies, live music and simple, evocative words, by telling a "natural" story. In a dinamic situation, the process of creation and transforming is reproduced, by giving to the child the possibility to feel and recognize himself in one or the other element.

The show started after a year and a half of workshop activities inside the créches: the four elements have guided the long path of experimentation, and gave the chance to collect the suggestions and reactions of the little ones who played, listened, smelled, touched, tasted.