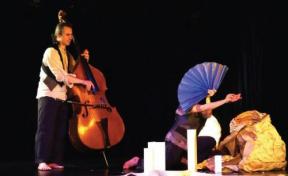 In Japan, Kami are the spirits of nature, the animals or the creative forces of the universe. The word also means “paper”.
In this new play inspired by haiku, a man and a woman try to meet, guided by music and movement.

Playful and mischievous, the Kami will give life to paper and the double bass, and will guide the actors through a poetic and surreal world.

It is a reflection on the fragility of life and nature, on the relationship with the others, which is made of ever-changing elements: a piece of silk paper with a coloured abstract stain becomes a cloud, rain, a plant; a blank sheet becomes a building, a window, a screen where origami animals can be projected; a piece of paper becomes a mountain, a desert, a dress, a hat; a strip of paper becomes a path... and in this fragile universe, a man and a woman try to communicate.